As expectations for a free internet increase, more novel ways have to be found to make money. Instagram is a prime example of how not to do it.

Like most science fiction films, it sought to portray an uncomfortable vision of the future, in this case one with scant disregard for civil rights or privacy. However, it appears that the advertising industry completely missed the point and thought Mr. Spielberg was portraying a rosy future where hard-working businesses can sell more products to consumers through a “relevant adverting experience”. At least, this would explain the logic behind those internet adverts of “57-year-old [Insert location you are accessing internet from] Mom looks 27 – click here to discover her secret”. It would also explain why, when you look at one website, the adverts of that product keep following you to other sites – an action I find comparable to sales reps from Boots following you into Debenhams and Costa to pester you into buying the shampoo you were vaguely browsing.

They haven’t quite reached the technology needed to do full Minority Report -style advertising, but recently a photo-sharing site decided it would join in the fun. Yes, following its recent acquisition by Facebook, Instagram helpfully informed its customers, somewhere in its new terms and conditions, stating that in one month’s time they’d have the right to use your photos for any advertising they want One problem: in most cases, it’s not just the consent of the uploader you need: you also need the consent of the photographer (who is not necessarily the uploader) and for adverts you really need the consent of the people in the photos too. So really the only practical legal way they could use this is to use people’s photos as personalised adverts directed at them. Not sure what they had in mind – maybe “If you liked these hills, you’ll love the hills in Bratislakislavia which you can now reach with cheap flights from us. Click Here.” Anyway, we’ll never find out what their plans were because a massive backlash forced them into a U-turn.


As I’ve said before, it is unfair to vilify a website simply for seeking new ways of getting commercial revenue. I can only think of one major website that runs itself entirely on voluntary donations (Wikipedia), and that is only possible through an unprecedented amount of good will, both from donors and volunteer contributors. The rest cannot run themselves for free. How far it’s morally acceptable to go is open to debate; some web users, for instance, argue that even the most non-intrusive advertising is bandwidth theft, whilst some less scrupulous advertisers would see no ethical issues in, say, putting an ad for a Wonga loan on a debt advice site. The moral debate, however, is a side-show: as is stands, there’s very few rules against intrusive advertising. They can do it, and they are.

But no matter how blasé you are about advertising ethics, there is one thing you ignore at your peril: how your customers react when you go too far. And this is where I think Facebook’s management of Instagram is a problem. Because Facebook has a record that it can get away with anything. It is one of the most heavily-criticised sites for is casual disregard to privacy. And yet every time Facebook makes a controversial change to its privacy policy, Facebook users usually react en masse by either joining a disapproving Facebook group or writing something disapproving in a status update. This is not a sweeping generalisation of all Facebook users being apathetic, but more an observation of how hard it is to vote with your feet. If you leave Facebook, you forfeit your network of Facebook friends. That’s not an issue for people like me who found the whole concept of Facebook friends utterly pointless, but I’m in the minority here. You Facebook friends won’t be waiting for you on Google+.

That safety net does not apply to Instagram. Migrating to another site is much easier: you just open a new account, upload all your photos, and close your Instagram account. No need to worry about how your friends will view your new site – search engines will pick it up in no time. But with Facebook so used to doing what it likes without consequence, it seems that complacency overruled common sense. And the rest is history. The outcry forced them to back down. Even this may be too late. Those who went through all the trouble of migrating to Flickr are unlikely to bother coming back. Facebook may well have changed Instagram into a $1bn waste of money.

What is most frustrating is that this was completely avoidable. There are plenty of ways of making money without alienating your users. Google Blogger provides AdSense on blogs on an opt-in basis, with a cut for both the blogger and Google, with enough left over to pay for the ad-free blogs. Wordpress funds its blogs through a series of optional paid extras, with again enough revenue left over to fund a free blog service. Surely there must be ways for a photo-sharing site to make money? How about, instead of using other people’s photos without permission,  scour instagram for the best photos are offer a deal on selling as a stock photo? You get a cut, Instasgram gets a cut, have enough left over to run the site and the added bonus of an incentive to upload the best possible photos. Sadly, such is the damage to Instgram’s reputation we’ll probably never know if they could have done this. 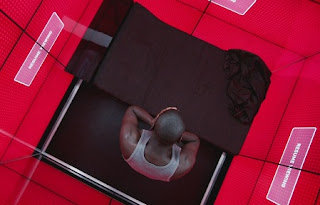 Will Facebook learn lessons from this? I hope so. Will advertisers in general learn lessons from this? I suspect not. I suspect they’ve already moved on from Minority Report and they’re now getting inspiration from the “RESUME VIEWING” scene in Black Mirror. It’s the bit where a computer detects you’re looking away from an annoying advert, displays a message saying “RESUME VIEWING” and plays an earsplitting high-pitched noise until you give in and look at the screen again? Luckily, there currently isn’t the technology to create something like this in real life - wait a second, could you adapt a Kinect to do that?

Oh dear. I've got a bad feeling about this.
Posted by Chris Neville-Smith at 13:42

Chris Neville-Smith
This is a blog I write in my spare time whilst working for SeeDetail. More Details.