Bring on the naked laptops

If we’re serious about using technology to empower users, people should have the choice to buy a laptop, tablet or smartphone without the software. 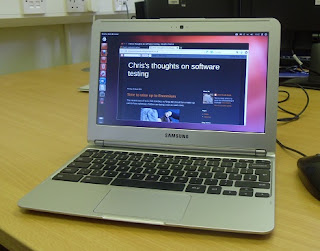 This is my new laptop. Observant readers will notice that this is a Chromebook running Ubuntu on it. As Linux fans know, Ubuntu and most other Linux distributions can be legally downloaded for free and installed on any computer. The only question is what computer you choose. For me, a Chromebook seemed like a good bet: they are cheap low-spec laptops, probably incapable of running Windows 7, but Ubuntu is a resource-light operating system and I use my desktop for anything resource-intensive. Chrome OS is heavily geared towards users of Google services, like GMail and Google Docs, but I’m installing my own software so that doesn’t matter. So, let’s buy a Chromebook and install Ubuntu. Simple, huh? Simple?

Hah, I wish! You have no idea how much blood, sweat and tears I’ve been through to get to what you can see in that photo. It all boils down to this thing on Chromebooks called secure boot (aka verified boot). Oh boy. This is something that, in theory, is meant to protect you from hackers up to no good – I have used the words “in theory” for a reason, but I’ll come back to that later. As far as Chromebooks are concerned, there is a way of switching off secure boot by going into “developer mode” (which isn’t advertised widely, but if the intention is to prevent people fiddling with settings who don’t know what they’re doing, that’s fair enough). Unfortunately, even in this mode, you still can’t boot from a CD/USB drive, which is the normal way of installing an operating system. Never mind, there’s an Ubuntu derivative out there called Chrubuntu, specially designed to be downloaded and installed from a command prompt in Chrome OS. Okay, that doesn’t sound too bad.


So, how did it do? Well, firstly I discovered that the way you enter developer mode on a Samsung Chromebook is different from other Chromebooks. Then I made several failed attempts to install Chrubuntu and eventually realised that the installation script I was using doesn’t work for my particular model of Samsung Chromebook, and in fact needed a different installation script. Once it was installed, I had another nightmare getting Libreoffice installed, which was down to the Ubuntu UK mirror not being able to download software with ARM architecture from uk.archive.ubuntu.com (you have to use gb.archive.ubuntu.com). There’s still other issues to fix, but currently Chrubuntu is only for open-source masochists. Yes, nothing beats the thrill of getting your new laptop to work, amidst fears you may have spent £230 on an oversized paperweight, but this is not an experience I’d recommend for Joe Public.

Why is this so frustrating? Because it doesn’t have to be this complicated. If you want Ubuntu or any other operating system on a desktop computer, you simply buy a computer with a blank hard disc, insert the installation CD or USB stick, boot up, and away you go. Laptops are a different story. It is near-impossible to buy a laptop without a pre-installed operating system on it, paid for by you. And even if you think you’ve managed to buy a laptop without Windows, you may still end up paying for it owing to this ridiculous arrangement where laptop manufactures have to pay Microsoft for one Windows license per machine whether or not it gets installed. But most Linux users choose to bite the bullet, pay a £40-ish premium for a product they didn’t ask for, and forget about it.

Now even this is getting worse. Microsoft have also been joining in with secure boot, but unlike Google, there’s not always an opt-out – and that would have included my ARM-based laptop had it been pre-installed with Windows 8 instead of Chrome OS. Microsoft argues that secure boot is necessary to protect you from rootkits, but is this really a proportionate response to the threat? The suspicion is that the real threat that concerns Microsoft is the threat of pesky users running operating systems Microsoft doesn’t want you to use. This may sound paranoid, but as Microsoft have previously attempted to stop “naked” desktop computers being sold (those 5% or so sold without pre-installed operating systems), and they were slow to announce that some (not all) kinds of computers would be allowed to opt out of secure boot, I struggle to find any more charitable explanations.

Tablet and smartphones are little better. These devices are, for all intents and purposes, another kind of computer. The only difference is that they have touchscreens instead of keyboards. Therefore, one would have thought you should be able to insert a USB stick and install whatever you like. Instead, installing another operating system on an Android device is about as complicated as my experience with a Chromebook. And this is at the mercy of Google voluntarily providing a mechanism to opt out of Android on a smartphone. They might withdraw this is a future update, just like Sony did on the Playstation. As for anyone who bought an ARM-based Windows 8 tablet – forget it.

Now, I don’t believe in leaping on the “Google good, Microsoft bad” bandwagon – there are plenty of questionable practices where Google has a case to answer. But on this very important issue of consumer choice, Microsoft is clearly the worst offender here. Google hasn’t been terribly helpful to users wanting to customise Android devices or Chromebooks as they see fit, but they have stopped short of outright blocking it. Microsoft, however, are actively preventing it (as does Apple, although I doubt many people would want to spend a fortune on an iPad if the first thing you’re going to do is scrub the disk), and that’s something I fundamentally disagree with on principle. If you’ve bought a computer with your own money, it’s nobody else’s business how you choose to use it.

But even the opt-outs offered by Google aren’t good enough. If we are serious about computers empowering users, users should have the option of buying any kind of computer – desktop, laptop or tablet – without the software. As this is possible for desktops, it’s no excuse to claim this is too difficult, and certainly no excuse for laptops which are functionally identical to their larger cousins. The current grand scheme to empower customers in Europe is the “brower choice” screen in Windows; I personally think that is a waste of time, because the choice of browsers was already there, just made a little more obvious. Instead, we need to look at where users don’t get a choice. It’s bad, it’s getting worse, and the availability of naked laptops would do a lot of good.
Posted by Chris Neville-Smith at 16:05

Chris Neville-Smith
This is a blog I write in my spare time whilst working for SeeDetail. More Details.